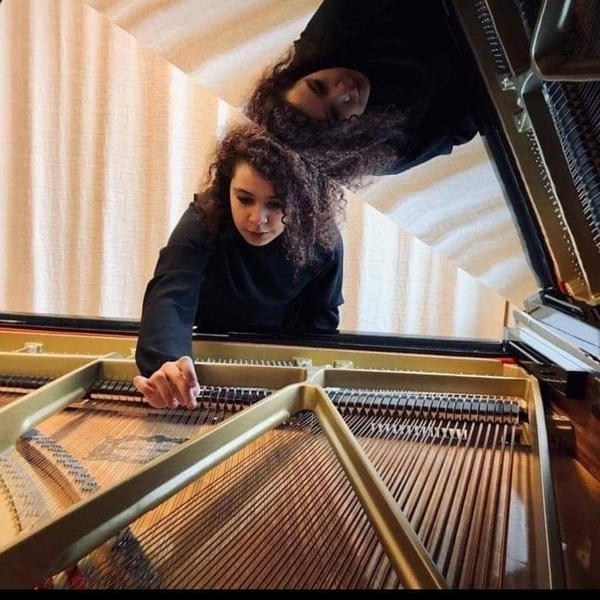 Piano lessons! For people of every level and age! First lesson for free.

Musical experiences
I started to play the piano when I was six years old and I had my first concert when I was seven.
During my High school studies, I developed skills as pianist and cellist. I was also teaching piano and I had concerts in some of the most important concert halls in Verona, such as: "Palazzo della Granguardia", "Sala dei cavalieri" and " Circolo degli ufficiali dell´Esercito".
In 2016 I played as soloist the Mozart piano concert k. 414 with the orchestra "Pietro Torri".
In 2017 I won the second prize in the "Florence Piano Competition", playing "Papillons op.2 " by Robert Schumann. After high school I started my bachelor in piano at "E.F. Dall'Abaco" conservatory in Verona, with
M° Adriano Ambrosini. In the same time I was studying composition with M° Federico Zanoda'.
During my University studies I started to teach in schools. I had my chamber music and solo debut in the "Teatro Ristori", playing a concert with music by Alban Berg, Arnold Schönberg and Anton Webern. In the same year I had a concert in " Teatro Ristori" with the " Storie Erranti" Ensemble, playing music by Maurice
Ravel, Edvarg Grieg an igor Stravinsky. In the same year I had concerts in prestigious concert halls in my region like "Palazzo Cordellina" in Vicenza and " Palazzo Pisani" in Venice for the "Simultaneo Ensemble" festival.
In 2019 I moved to Sweden to study at the Academy of music and drama with Bernt Wilhelmsson. I graduated in piano solo performance in October 2020, and in February 2021 I have been admitted to the Master in Orchestra performance at the Högskolan för scen och musik.
While in Sweden I had the possibility to collaborate with Göteborg Wind Orchestra, and have masterclasses with Simon Crawford Philips. I also had lessons with members of the Göteborg Symphony Orchestra such
as Mårten Larsson, Erik Risberg and Johan Stern.
I had concert as soloits and different ensemble constillations in important churches in the city, Domkyrkan, Tyskakyrkan and Vasakyrkan.
Currently I am the pianist of the Göteborg Sinfonietta.

I have a lot of experience teaching in schools and giving private lessons of music, instrument and ensemble to people of every level and age. I am very passionate in my job and I have a positive approce while teaching, developing the artistic personality of my students. I carefully chose the repertoire for my students, in order to make them feel happy with what they play.
I follow the musical interested of my students, from pop music to classical, so they can give the best on their musical development. I mostly want my students to have fun and find a way to be able to express themselves in a positive and creative way.

In my life I experienced many concerts and music events, so my goal is to give the same opportunities to my future students!

Piano lessons! For people of every level and age! First lesson for free.